Pansies are such a friendly-faced flower! But until the 19th century most people considered them a weed. Today, pansies are a hybrid plant cultivated from those wildflowers in Europe and western Asia. Much of the collection and cultivation of pansies can be attributed to plantsmen and women in the UK and Europe more than 200 years ago. For example, Lady Mary Elizabeth Bennet, daughter of the Earl of Tankerville, and her gardener cross-bred a wide variety of Viola tricolor (common name “Heartsease”) and showcased their pansies to the horticultural world in 1813. Further experiments around the same time eventually grew the class to over 400 garden pansy varieties.

Garden pansies (Viola x wittrockiana) are a mixture of several species, including Viola tricolor. Oftentimes the names “pansy”, “viola”, and “violet” are interchangeable. However modern pansies are classified by the American Violet Society as having large-flowered blooms with two slightly overlapping upper petals, two side petals, and a single bottom petal, with a slight beard in its center. They’re considered annual bedding plants, used for garden decoration during cooler planting seasons. Pansies come in a rainbow of colors: from crisp white to almost black, and most all colors in between. They are also a great addition to your spring or fall vegetable garden as they are edible and pair well with lettuces. They can also be candied and used to decorate sweets or other dishes.

Most pansies fall into a few categories: Large (3 to 4 in.), Medium (2 to 3 in.) Multiflora (1 to 2 in.) and a new category of Trailing pansy. Some modern large-flowered pansy series are Majestic Giant Mix, bred by Sakata (a 1966 All-America Selections Winner); Delta, bred by Goldsmith Seeds; and Matrix, bred by PanAmerican Seed. Medium-sized pansy series include Crown and Imperial by Sakata (Imperial Blue won an All-America Selections in 1975). Multiflora pansy series like Maxim and Padparadja won AAS awards in the early 1990s. New on the scene for hanging baskets and ground cover are WonderFall from Syngenta, and Cool Wave® pansies, from PanAmerican Seed – the makers of Wave® petunias. These Trailing pansies spread over 2 ft. wide and overwinter in fall gardens. Today’s garden pansy varieties can fill any sunny space – large or small, hanging overhead or growing underfoot – with soft fragrance and happy blooms.

Starting Your Pansies From Seed:
To germinate, start your pansy seeds indoors with a soilless mixture (this helps prevent disease on the seedlings). Plant seed 1/8-in. deep with a light cover and a gentle watering. Pansies prefer darkness for germination. The media temperature should be 60-65°F and keep air temperature at 70-75°F. The media should stay damp (covering with a plastic wrap or damp newspaper will help retain humidity. A fine spray or mister can be added if the media dries. Germination occurs in 10-20 days. When shoots appear, remove covering and move the flat to a brightly lit but cool room to continue to grow. Continue to grow cool. Separate seedlings into larger containers after two sets of leaves appear. Begin to feed with diluted plant food.

For Transplants or Purchased Finished Plants:
Space your pansies 6 to 10 in. apart in a well-drained and fertile soil location. The best location is an area that receives morning sun. Adding granular or time-release nutrition to the soil is encouraged, especially for trailing pansies as this increases their vigor and number of blooms. Offer plenty of water at planting and during their adjustment period to help establish roots and minimize stress. Mulching can help retain moisture and reduce any weeds that may compete with your plants. Pansies planted in the spring will enjoy the warm days and cool nights of the season. Most V. wittrockiana will begin to diminish or go out of flower as nighttime temperatures begin to rise in the summer. When planted in the north for fall outdoor decorating, pansies will enjoy a shorter but colorful season of blooms and in many cases will overwinter to pop up again the following spring. Southern gardeners often use pansies as their winter color and enjoy them all season long.

For more information on Pansies, please see our NGB website Year of the Pansy page! 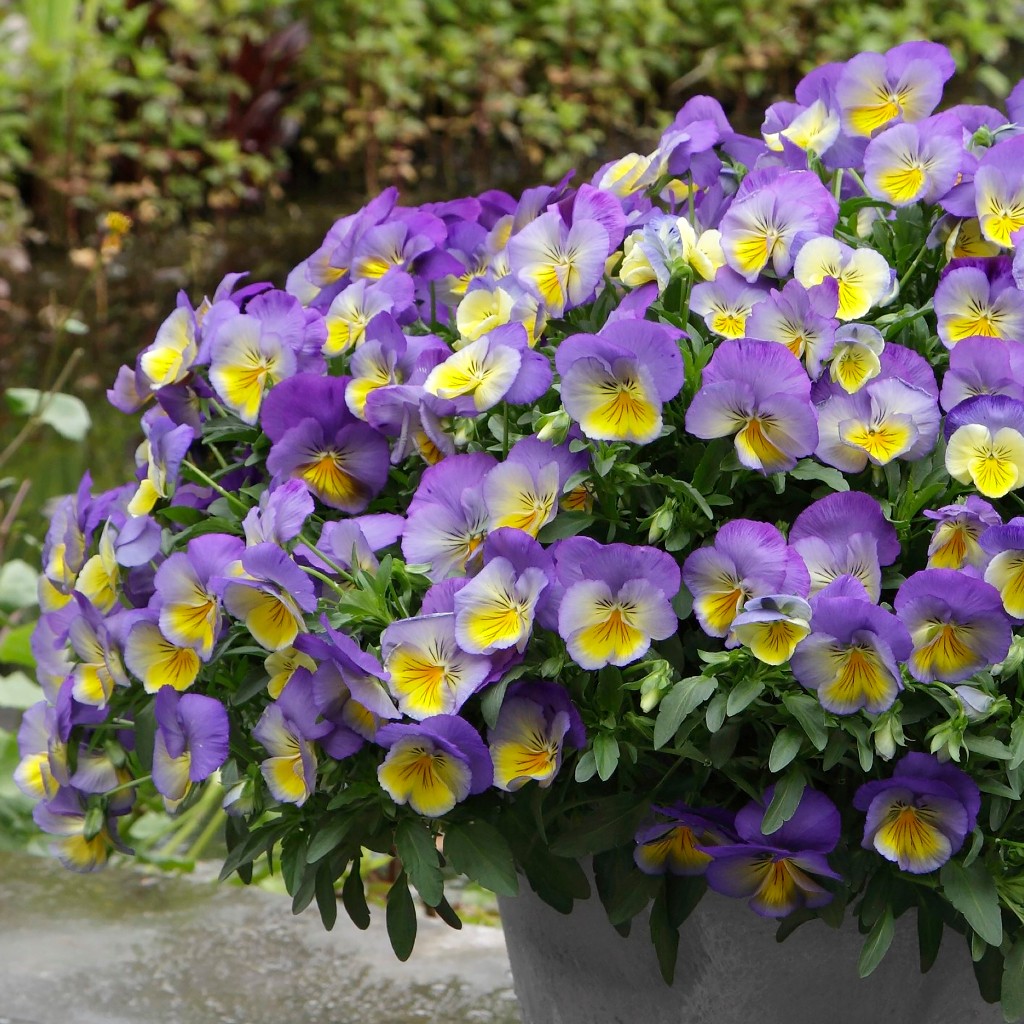