An interview with Steven Price, President of Bird Studies Canada.

Mid-November, we heard the news that the Gray Jay (or Whiskey Jack) is officially the national bird of Canada.  Great.  We need an official bird more than we need an official lot-of-things.  Allow me to fill in the corners of this one for you, by asking some important questions of my #1 friend in the birding business, Steven Price, President of Bird Studies Canada (who are #1 in THEIR business, not-for-profit as it is).

Mark:  Steven, thank you for your monthly contributions to my newsletter.  We are getting GREAT feedback!  Now, about our new National Bird, the Gray Jay, you had a hand in the selection, no?

Steve: Actually, Bird Studies Canada was a supporting partner in the Royal Canadian Geographic Society/Canadian Geographic contest.  BSC helped build the list of 50 original bird nominees, write some of the background stories for the birds, participate in the online debate, and promote the entire idea through many media interviews.

What was the criteria for selection of the bird?

Bird Studies Canada did not define the criteria, RCGS did.  The Gray Jay came third in the national online poll, somewhat behind the first-place Common Loon.  You might say the loon won the popular vote, but the jay won the ‘electoral college’! (good one Steve!)  A national bird should span most of the country, as well as spark interest and curiosity in birds and the environment.  The winner – the Gray Jay – passes those tests with ‘flying’ colours! (ok, that’s a bit corny – but Gray Jays love corn, no?  I get ahead of you…. sorry) 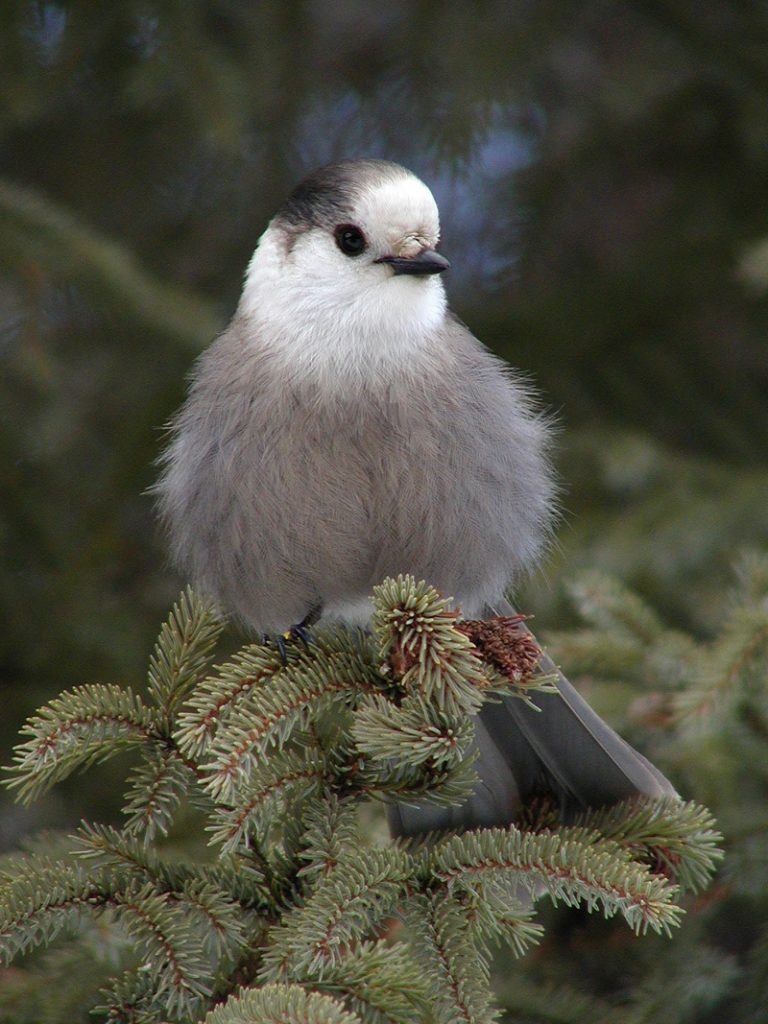 Why, in your opinion, was the Gray Jay picked?

What makes the Gray Jay peculiar to Canada?

Most of the world’s Gray Jays live in Canada.  In fact, it was formerly called the Canada Jay.  While the range does creep into the boreal forest and Rockies of the northern United States, most of the Gray Jay’s distribution is in Canada.  It touches every province and territory, but is absent in the prairies and the Great Lakes-St. Lawrence area.  They stay over the winter too, unlike the Loon.  Gray Jay usually lives where there are abundant conifers, especially various spruce species.

What habits/characteristics stand out about this bird?  Song/feeding habits/habitat etc.
How can we attract them to OUR yards?

Gray Jays come as close to being friendly as any bird.  They will visit a campfire or picnic site, alight on your hat or shoulder, and take a scrap you offer or steal one if you don’t!  Gray Jays are truly omnivorous, eating seeds, fruits, insects, carrion, suet – just about anything.  If you live near conifer forests, almost any food at your feeder will be on the Gray Jay’s menu.

What is your opinion of the Gray Jay (or whisky-jack) as a choice for our national bird?

The Gray Jay has been selected by Canadian Geographic magazine as their recommendation for the federal government to adopt as an ‘official’ national bird.  Whether the government confirms that choice is still ‘to be determined’!  (so, I was wrong – this bird is not ‘official’ yet.  Mark)  But the Gray Jays widespread range and endearing habits make it an engaging choice for sure.

What does it mean to be a ‘national bird’?

I hope a national bird helps all of us – gardeners, birders and all conservation-minded people – discuss and promote understanding and further protecting our environment.  A national bird should help tie us to the outdoors, to the wonderful and beautiful natural places still left in Canada.  And if you are fortunate enough to see one in your garden, then you have a ready talking point at any time!

Anything you would add?

The Gray Jay is often referred to locally as the ‘whiskey-jack’.  It’s widely believed that the name arises from ‘Wisakedjak’, the friendly, trickster god known from Algonquin, Cree, Ojibway and Dene stories.  One spirit’s name reinforced by another kind of spirit!

There you have it folks.  Straight from the great birder’s mouth.  Go to http://birdscanada.org/ for all kinds of great birding info and your chance to join “Project Feeder Watch”.