The International Year of Family Farming 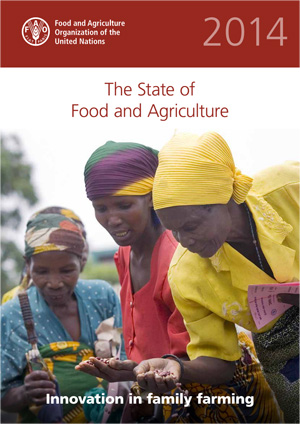 This extensive tome was release on October 16, 2014, which also happened to be World Food Day. At 161 pages, it’s not a light read. It is, however, well worth it if you have the time. If not, I will give you the highlights.

The premise behind last year’s report was family farming and its sustainability in a world with a growing population and higher standards.

According to the report, a family farm is defined as a farm that is owned, operated and/or managed at least partly by a member of the household. But the term incorporates much more. Developed specifically for the International Year of Family Farming was this much more encompassing definition:

Family Farming (which includes all family-based agricultural activities) is a means of organizing agricultural, forestry, fisheries, pastoral and aquaculture production which is managed and operated by a family and predominantly reliant on family labour, including both women’s and men’s. The family and the farm are linked, co-evolve and combine economic, environmental, social and cultural functions.

Some Surprising Numbers
As I read through the material, a few numbers popped out at me. Numbers like 500 million. That’s the number of family farms the UN has estimated exist in the world. This 500 million equates to more than 90% of the world’s farms that are run by an individual or family and are relying primarily on family labour. These 500 million farms produce 80% of the world’s food.

842 million: the number of people who are chronically hungry. The more surprising information behind this number is that we are not short of food. Not even close: we have more than enough food to feed the world’s population. These 842 million people simply cannot afford to eat. There is a serious food distribution issue at hand here.

There is good news though and I will get into that more next week. It’s a large report that I think deserves more than one blog dedicated to explaining it.