The bugs of the garden are commonplace to some and rather unfamiliar to others.  For those of you who don’t know what you’re looking at, I am here to help.

Many insects look similar to one another. These critters are, most likely, related: belonging to the same family, closely related or maybe not. Let’s take a look at a few that can be confusing.

From far away, they look similar: red, oval-shaped beetle with long-ish antennae. Close up, there are some huge differences: the milkweed beetle has black spots along its back and the antennae tend to curl downwards more.  The lily beetle is simply red.

The second major difference is where you will find them.  As their names suggest, the milkweed beetle will be found on milkweed; the lily beetle on lilies (Asiatic lilies, not daylilies). Lily beetles are incredibly destructive and multiply at an alarming rate; milkweed beetles can be destructive, but they are unlikely to munch your plant to the ground overnight (as a group of lily beetles can do).

You’re saying to yourself, “Really, Mark? A hummingbird and a moth? Who gets those two mixed up?”  But you would be surprised at how much they look alike!

Take a look at this video of a sphinx moth in flight. They hover in a similar way that a hummingbird does and poke their faces into the flower to get the nectar.

How to tell the difference? The most obvious is the size: the moths are smaller, although it may not be easy to tell without a comparison or from a distance.

Look for these features: legs, antennae, and beak.  The presence of legs and a beak mean you’re looking at a hummingbird; antennae means a moth.  Hummingbirds are also quicker than the moths and many moths will be more active into the evening hours while their hummingbird counterpart tends to fly during the day.

Out of the three pairs, this will likely be the most difficult to distinguish. From the photo below, it’s easy to see why.  Both have a similar shape with similar colouring. The soldier bug is actually a beneficial insect: eating up caterpillars and other small soft-bodied insects. The stink bug, on the other hand, prefers to chomp down on your plants. 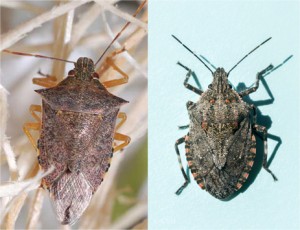 The most noticeable differences are the shape of the body and of the shoulders.  On the left is the soldier bug: its body comes to a narrow point and a black spot forms where the wings overlap; the shoulders are pointed (reminds me of the 80’s when shoulder pads were all the rage).

On the right is the rough stink bug.  You can see that its body is a little stockier, a little more rounded at the bottom and the shoulders aren’t nearly as prominent.

Take a good look in your garden and watch for these critters. Are there other insect pairs that look alike to you?