Last week I showed you the collection of trees and some of their seeds that I collected during a stroll on a nearby trail. I like to take walks this time of year: the weather is cooler and the colours are rich. There are still late season blooms to look at (asters and goldenrod are prevalent alongside the trail I walk) but, beyond that, I can see the results of pollination. Seed heads and pods are around and I like thinking about how the seeds are transported just by looking at how they are designed.

Berries, though, are colourful reminders of a process we all too often take for granted. I took a stroll after a very wet, rainy day and my pictures reflect that as you can still see water dripping from the leaves and fruit.

Not all wild berries are edible. I tend to snag a few blackberries and raspberries when I see them and know absolutely 100% for sure that’s what they are. Unless you’re a berry expert, I would recommend looking and not touching, let alone eating.

Blackberries (Rubus allegheniensis)
Blackberries in my area are finishing up. There are a few patches of the stuff that don’t get quite as much sun and so they are slower to ripen. I like the look of a blackberry bush when its berries are in between ripe and ripening. The unripe berries range from white, as you can see in the photo, to bright red right before turning black.

I grow blackberries on my property in a more managed way and I would suggest that if you’re thinking about growing your own, you buy a good quality plant from a trusted nursery. Wild blackberry bushes can get pretty, well, wild and I have seen them climbing up and over trees just to reach the light. 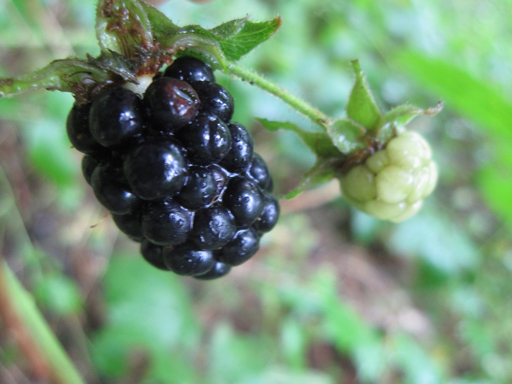 Raspberries (Rubus idaeus)
The raspberries on the trail are pretty much finished – I was lucky to get this photo! They are delicious when they are in-season and I generally give them a quick once-over to check for insects before chomping down. Like the blackberries, though, if you’re going to plant your own, I would suggest a cane variety. These wild raspberries tend to get unruly, spreading their vines over top of everything in sight. 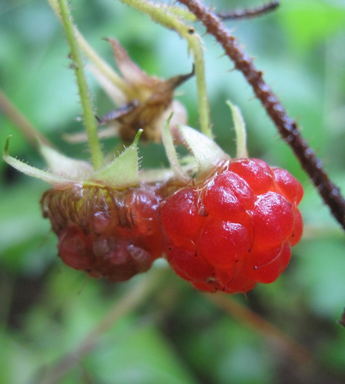 Doll’s Eyes (Actaea pachypoda)
These have to be one of my favourite berries to see in the late summer/early fall. The colours alone are striking and they do, indeed, look like the eyes of a doll. Not to mention the bright pink stem they grow from. Native to my area, doll’s eyes are also known as white baneberry. Berries are eaten by birds who disperse the seeds.

These berries are NOT edible and human consumption can lead to cardiac arrest and death. 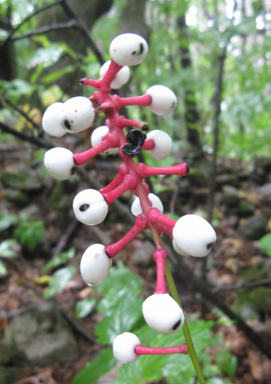 Jack-in-the-Pulpit (Arisaema triphyllum)
A strikingly awkward-looking plant when in bloom, Jack-in-the-pulpit doesn’t look any less awkward when in berry (is that a term?). Native to eastern North America, the plant is composed of three leaves, a spadix (Jack), and a spathe (the pulpit). The spathe is the hooded feature that covers the spadix. The bright red berries you can see here are created through pollination by flies.

Again, not a plant to be eating as it can cause burning and irritation. 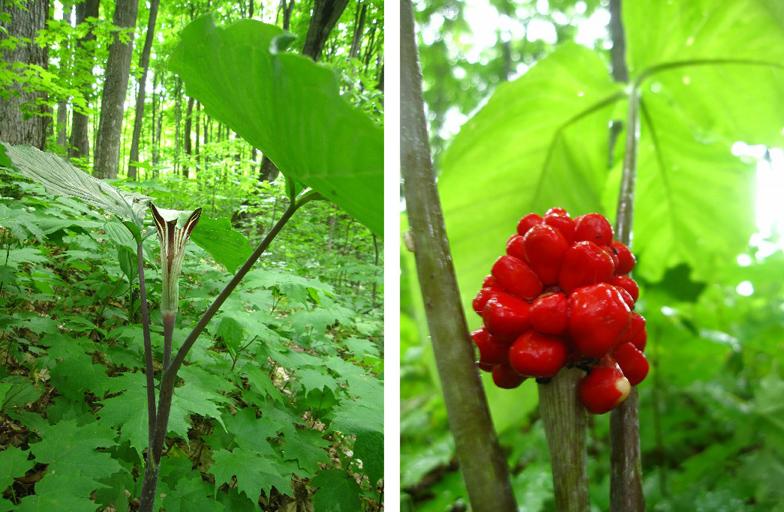 Smooth Solomon’s Seal (Polygonatum biflorum)
Smooth Solomon’s seal has berries that are lined up along the stem beneath the leaves. Beginning as small white flowers that hang down, pollinated flowers will turn into green berries that eventually mature to the blue-black blueberry-looking berries you can see in the photo. They are a hardy plant that does well in shady areas. They do take a while to become established, so are not for the impatient gardener.

Native in my area, and throughout North America, but again, DO NOT eat the berries. Leaves and stems are also poisonous and can leave you feeling rather ill. 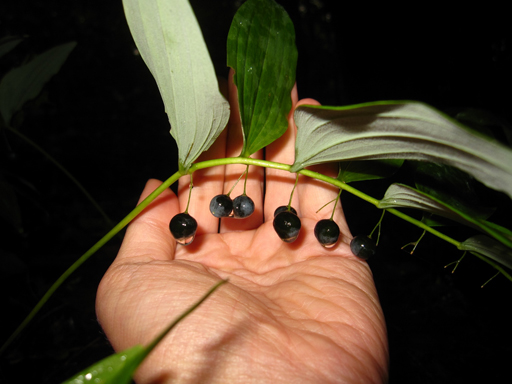 The berries turn from speckled white-pink to red and are located at the end of the leaf stem (known in the horticultural world as a terminal cluster). The ripe red berries are edible, though I have never tried them myself. I have heard mixed reviews about their palatability and think I’m just not quite ready to take the plunge. 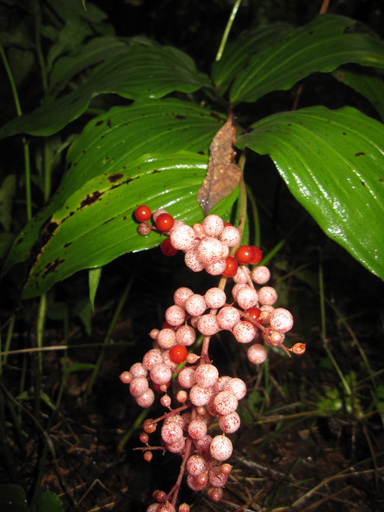 Lily-of-the-Valley (Maianthemum canadense)
Lily-of-the-valley is a bit of a controversial plant but largely because it has a non-native, rather aggressive, counterpart that will do everything in its power to take over well beyond where it is planted. The native sibling, however, also known as Canada Mayflower, is an important understory plant and often one of the first to resprout after a forest fire, reducing soil erosion from wind and water.

I wouldn’t suggest eating these berries. Not poisonous but are known to cause digestive problems. 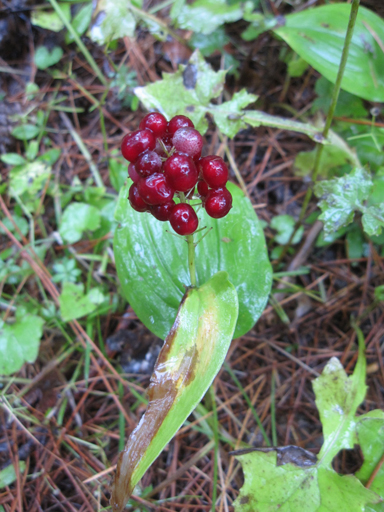 Climbing Nightshade (Solanum dulcamara)
The only plant in this list that is a non-native weed, climbing nightshade is rather aggressive. During my walks I see it climbing trees, plants, and posts put in place to direct pedestrians. In the summer, the vines have fairly attractive purple flowers with yellow centres. Berries change colours slowly as they ripen, starting green then turning yellow and orange before finishing at red. The ripe berries are eaten and distributed by birds. The plant is poisonous to livestock and berries have been known to be poisonous to some people but not all. Best to just avoid this one. 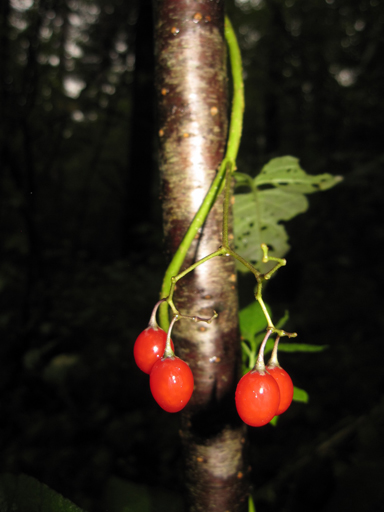 When it comes to wild berries, it’s always best to take a ‘look, don’t touch’ approach. Unless you are familiar with the plant, don’t eat berries you see. They are interesting to watch grow, however, and I encourage you to get out into some ‘wild’ space this fall to check them out for yourself.